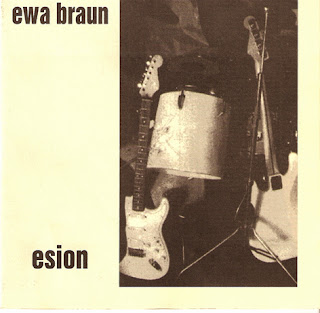 Ewa Braun is a Polish band formed in 1990. Their first demo tape was recorded after some time of rehearsing and was quite controversial. The demo was titled Pierwsza Kobieta (The First Woman), a phrase that has been taken from a sports magazine. The tape was issued by the band itself.

During the next two years the band played 5 concerts and managed to compose at least 2,5 hours of music, 30 minutes of which was recorded in the form of the second demo tape, titled “W tysiacu miejsc naraz” (“In a Thousand Places at the Same Time”) (‘92) and also produced with the band’s own means.

In 1993, after a lot of attempts and inconceivable endeavours and a lot of time spent on waiting in the corridors of the
independent stage, the band managed to record a record in the historic GoldRock Studio under the supervision of the last of the living old Polish punks Robert Brylewski. The record was called Love Peace Noise and was released on an independent “Nikt Nic Nie Wie” label (94).

The band played more concerts, some of which took place abroad together with TROTTEL.

In 1996 the band recorded “Esion”, a record that took everybody by surprise (even the band itself). They started to play very regularly in Poland and Europe: in Germany, Netherlands, Switzerland, Croatia and Austria. Then a guitarist, Peter, joined in.

In 1998 the band recorded “Sea Sea” in BluBox Studio (BluNoise - Germany). The album received wide acclaim in Poland and abroad. “The Wire” magazine put the intro from “Sea Sea” on the “New Music from Central and Eastern Europe” mixtape. Unfortunately, the intro piece has nothing to do with the band’s music style and some people who didn’t know Ewa Braun could get confused.

The “Sea Sea” album was on the Polish indie Label, “Antena Krzyku Unc.” It had a big distribution with lots of licensed music from the West.

In 2000, after a lot of rumination, a live record was put out. The album was called “Electromovement” and was recorded on a CDR during a concert. What is more interesting, only two condenser microphones were used to record the music.